The next weekend is just around the corner and I realized that I slacked off last weekend and never recounted my actually somewhat eventful week full of eating out at my not usual hangout spots.  The initial idea was to give it a separate post but I figured how about celebrate lunch time with a nice foodie post 😉

On Friday (yes the dinner I mentioned before going home to watch Frozen), my friend and I went to eat at Jack Astor’s.

They had THE best Sangria.  I mean, it tastes like my boyfriend’s mix a little.  I looked at the menu and realized they used all my favorite wines and juices.  It was so awesome!

My friend took the Hawaiian Punch.  I’m not sure what was in it.  We both haven’t been eating a lot.  He’s training and I’ve been cutting on overeating.  Still, I try to not let that control my going out mood too much.  We skipped appetizers. I had some delectable half rack of ribs.  I just love ribs.  It had a tough week and needed a pick me up 😉 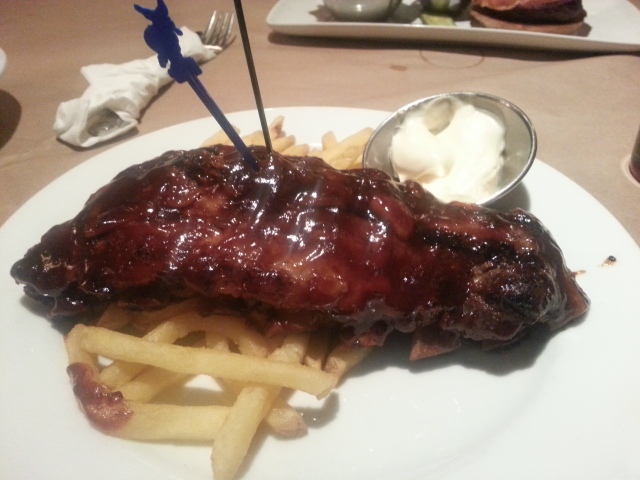 Half rack of Ribs with fries

My friend took the Classic Hamburger.  He didn’t tell me if it was good but he didn’t complain about it so I guess it was okay. If the burger looks flat, its because he only has the meat patty and onions and something else.  He’s not a huge fan of certain vegetables.

That meal hit the spot for me and we had a server in training and a waitress helping him out.  They were super cool and fun to talk to so that added to the whole dining experience 🙂

Saturday was a different vibe because it was girls night out.  The highlight was celebrating one of the girl’s birthday.  We hadn’t decided what to eat but we wanted to not go all economical and try to eat something different.  After a lot of walking around and debate, we settled to go to the bustling Crescent Street and chose an Italian restaurant (that I haven’t been to since forever) Weinstein & Gavino’s.  Contrary to Jack Astor’s, right off the bat, we weren’t too impressed with our waiter.  He acted a bit pretentious and mean.  Eventually he ended up pouring ice all over us so that didn’t win him any extra points. 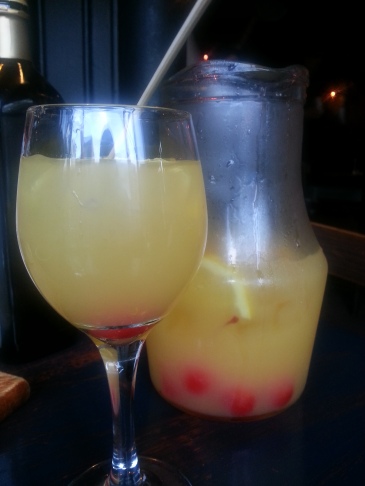 My other girl friend took the Dinner that included a Curry Chicken and Vegteables Soup, I believe.  The main meal was pasta with some creamy sauce.  I can’t remember the exact name.  It was too far away…. 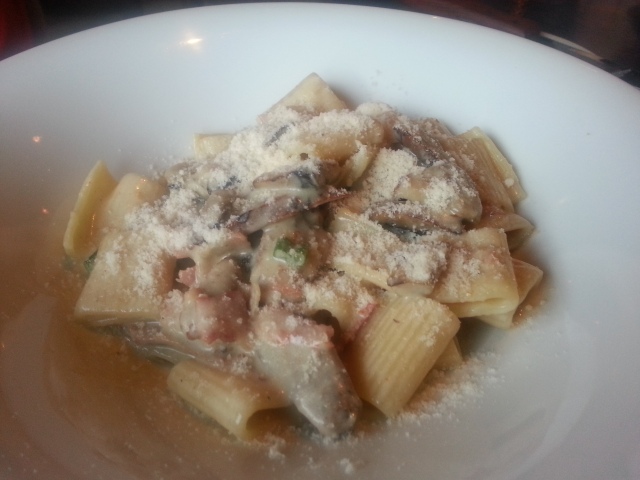 Now for mine, I chose the whole wheat linguine with clams and basil with tomato sauce. 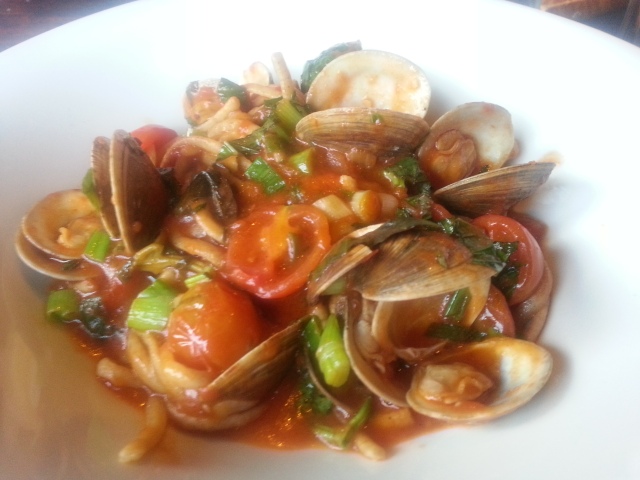 I have ot say, this meal was SO AWESOME! I’m pretty huge on seafood.  Not so much a frequent eater of clams but the sauce complimented everything so well.  The issue I have with whole wheat linguine is that its often very rigid and not cooked well enough.  Probably because it was fresh pasta that it didn’t have that problem.  I loved it!

After that, we went off to karaoke night! It was super fun! The birthday girl surprised me with some of her song choices and shocked us with some other selections while I finally embraced my choppy rapping skills again and realized that I really need to get back to practicing again because I can’t sing much anymore.  I was far from perfect before but a few years of slacking off and the control is not too great!

Yikes, look at me, sidetracking again!

What type of pasta do you like? What types of restaurants do you like to go to? Any cravings on this Friday? 🙂