*If you don’t normally read this, please check this one out and scroll to the absolute bottom for the final announcement/shoutout! Thanks! *

This week has been really eventful both at work and with my personal life.  The focus is on my personal side of the trip down memory lane.

For one, my best friend who has moved out temporarily to Saskatchewan for studies and family came back to visit.  On Monday, she arrived and we organized time to meet up with her and our other friend who is the bride to be in less than a month where I will be the maid of honor.  Unfortunately, my best friend can’t make it due to her studies so she felt it was her priority to spend time together.

We had some homemade banana mini cupcakes, helped out with some party favors (that I will keep a secret until her wedding post after its over) and talked about everything to catch up. 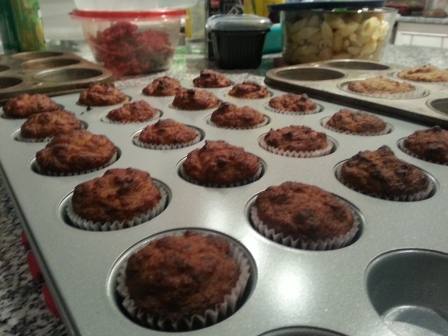 Tuesday comes around and its work and then get home as soon as possible to eat and pick up the car because its Science Fair judging night. I’ve been doing this for 10 years or something.  I met not only my best friend there but a lot of her year showed up because this year it’s their 10 years and they had a mini reunion of sorts.  I know some of her friends also but memories as I walked down that hall just all came back. 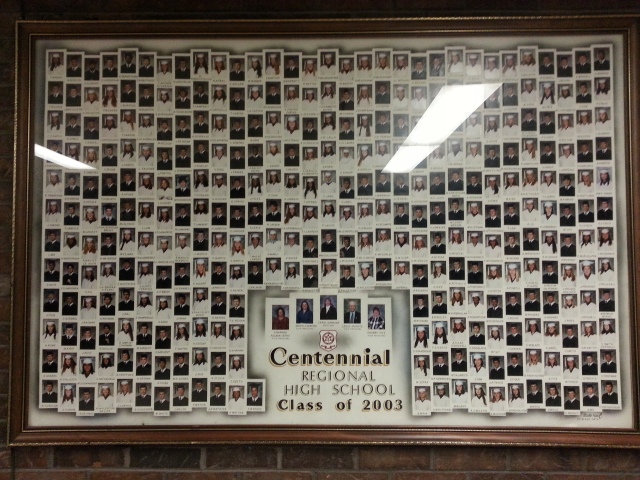 Thats my school and my graduating class.  We were one of the biggest classes to graduate with about 340 students approximately, if I remember correctly.  I’m not going to do a closeup but I can see myself in this.

And we also acknowledged that our school pride as changed into a very artsy direction with graffiti artwork on the walls and they now have houses, which is pretty cool.  We only used to have it for Grade 7 & 8 Middle School homerooms all had their own little groups. 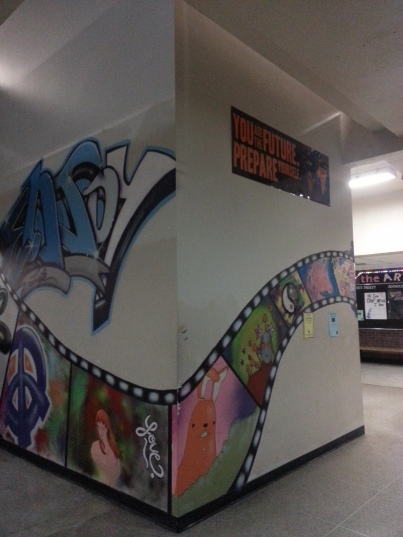 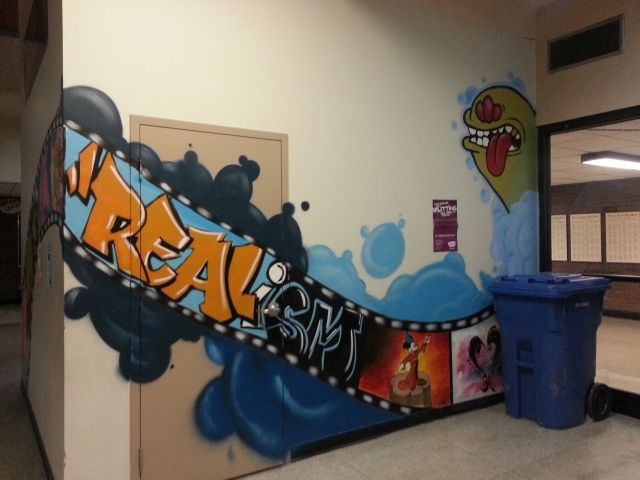 The school’s really changed in the last decade.  Plus, this was one of my most enjoyable Science Fair judging experiences because everyone came in average. I didn’t have to fail anyone because it was crap (because I’m mean that way) and no one got anything exceptional in the 90s but they were all between 75-85 which actually marks a good year.  Believe me, I’ve already mellowed out from the phase of vengeful overexpecting judge that recent graduates usually go through for all the crap we had to endure when we did our science fair.

During the week, I also received this cute bracelet from Ashley Bridget with the theme of JOY that I ordered from Groupon.  It was between this one and one with the theme of ENLIGHTENMENT.  I liked this one more. Who knew I’d go for pink, right? 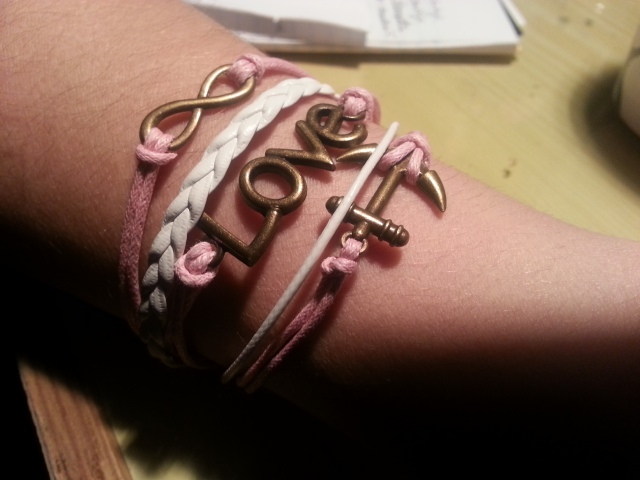 I think that was Thursday because that part kind of made my day after something crazy at work broke out.

On Friday, I actually had a day off because my mom came home from her trip midday and it would’ve been pointless to go to work with public transportation and all.  I traded it in for Saturday work day.  Whats great is that the bad weather stayed away and we only got some rain (instead of the forecasted freezing rain); renewed my medicare and driver’s license (finally!) and met up with one of my friends.  We had one of our most creative and productive hangouts ever…

That night, I also had to meet up with the other bridesmaids for my friends wedding.  One of the bridesmaids couldn’t make it but it was enjoyable to sit down with them and I even reunited with a Smirnoff Ice, instead of Sangria or Mojito 😉 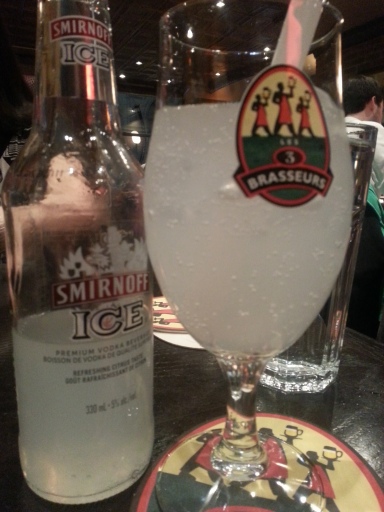 I ordered a delicious Chicken Brochette with rice and fries.

The bride to be ordered a thin crust pizza which was called the Brasseurs special.  The restaurant is our usual joint Les 3 Brasseurs so that was their special combination.

Going to work on Saturday wasn’t all that bad.  I managed to take advantage of the beautiful blue skies along with the rather heavy winds but still pretty warm morning.

After that, I came home to a night with the girls (along with the guys) coming over before my best friend leaves tonight.  We did a lot of talking over some delicious white wine called Blue Nun.

Plus, we took a lot of the pictures: normal, silly, selfies..you name it! The guys were all falling asleep and looking bored while they looked at us helplessly.  Here’s a few of the shots! 🙂 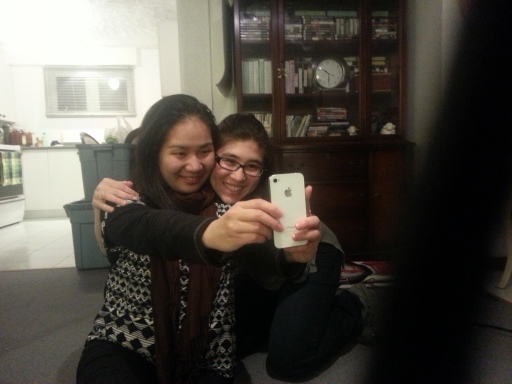 Thats what 20 years of friendship brings! Its pretty awesome to get everyone together and to just have fun.

I’m always grateful for the people in my life and after last weekend’s little dilemma, this hangout meant a lot more than it usually would.  These girls are exactly what that quote is.  They are like my sisters before we’ve been friends for so long and we’ve been through a lot of ups and downs together and each in our own way we’ve grown to how we are now.

I’ve been writing this during intermission and short commercial break of the Gold medal game of Canada vs. Sweden.  Its enough and time to watch the last 5 minutes.

Before I head off, I’d like to give another shoutout.  March is coming up in a week! Recommendations month is right around the corner.  I have a few recommendations lined up already.  I urge you to give me recommendations here or on the page HERE!  If not, tweet, email…whatever you’d like.  I’d love to hear all sorts of recommendations and remember, it doesn’t just have to be movies, it can be your own novels or piano covers, maybe you want a vlog somewhere in Montreal, its totally up to you. Its about putting the spotlight on you and its one of the few ways I know how to do that.  If you want me to watch certain TV series, I would also, but within the limits of what Netflix has to offer 😉 Join in, have fun and share stuff that you like, you’d like to see or what you’d want me to make, watch, read, do 🙂 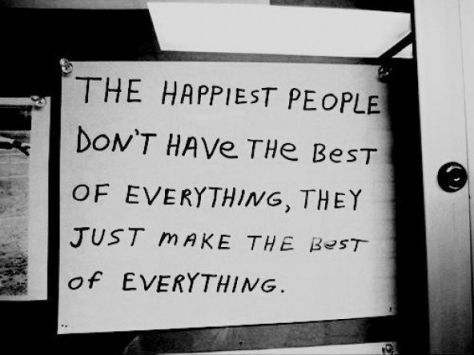 Hope you’ve all had a fabulous weekend, my awesome blogging friends! Happy Sunday! 🙂

6 thoughts on “A Trip Down Memory Lane! (and a final shoutout!)”