Yesterday I posted a selfie with these darling cupcakes that I made.  They were supposed to be pink but it didn’t really exactly look pink even though I used red fool coloring.  So now it just looks like plain cupcakes with marshmallow hearts on top. 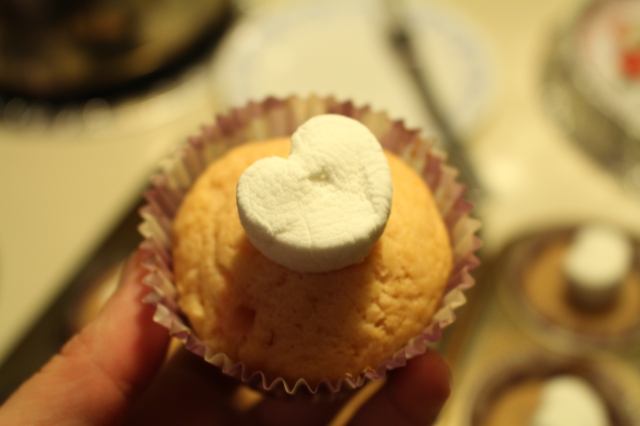 Don’t you love the world of pinterest? I found the recipe there.

Fresh out of the oven

You see the color difference in that? Its because the batch on the left has not milk so it retained a more “pink” look. While the one on the right has black sesame soy milk so it looks more dark and neutral.  That replaces the buttermilk. I am lactose intolerant so that was the best alternative I could think so.  Either removing it completely or using milk and I’m in the phase of black sesame soy milk.  Plus, I’m still learning about how to get the right shades with food coloring and since I don’t use it all too often, its been hard.

Still, garnishing it with a little marshmallow heart that I formed with my hands after cutting a marshmallow in half was a nice little touch, no? I think it looks cute even if the cupcake doesn’t look too great. But, I can guarantee you that it tastes good 🙂 Of course, the ones without milk were a tad more dry but the ones with were nice and fluffy. It wasn’t too sweet and the marshmallow adds to the flavor. Everything worked out good in the end.

I’m going to try to do another Valentine’s baking session if I get inspired.  If you are looking for something else, I really like my last year’s bake, Valentine’s Shortbread Hearts 🙂 You can check it out HERE! Those were mega adorable and tasted so awesome because I love shortbread.

What do you like as sweets for Valentine’s? Do you know any alternative for buttermilk?