This year’s start of the Valentine’s Marathon was actually a complete spontaneous choice.  I decided this morning that I wanted to watch a romantic comedy and didn’t want to get out of bed and saw this in my Netflix list so I watched it.

Jamie (Mila Kunis) is an emotionally damaged headhunter who just fell out of a relationship and decides to not get emotionally attached in another relationship.  While at her job, she is sent to help connect Dylan (Justin Timberlake) to a art director position for the GQ.  Dylan has his own set of commitment issues and also is single as well.  He also ends up moving to New York City for the job and end up being good friends with Jamie.  Being in similar situation, they decide that to fulfill the desire for sex, they would never want to date each other so it would be easy to keep it simple with a friends with benefits relationship. Except, is it really that simple?

There’s only one specific reason that I’ve been putting off watching Friends with Benefits and thats Justin Timberlake.  I like JT as a singer, more his older stuff but as an actor, he really has a lot of space of improvement.  I mean, a long long way.  Bad Teacher was a disaster, In Time was simply average, was he in something else? Point is, I recently just starting liking Mila Kunis so I was worried that JT would bring this down.  I’m happy to say that he didn’t! Justin Timberlake finally  has a movie that I enjoy.  I think it really has to do with Will Gluck being the director because that man also did Easy A and I have immense love for it, just read my review HERE!

Friends With Benefits is nothing extraordinary in the world of romantic comedies but the chemistry between Justin Timberlake’s Dylan and Mila Kunis’s Jamie is very good. They are entertaining to watch and I found myself laughing quite a bit.  Its an entertaining movie and a fun premise.  I don’t know how feasible friends with benefits actually are in reality but it doesn’t matter because in reality its about being able to be in a relationship with someone that you can be completely straight-forward with and thats besides all the emotions and feelings.

Isn’t that so true? And thats why this movie is so great! Because its just so true. A lot of girls will have fairy tales in their minds.  My best friend will probably give me the “I know you do” look.  Yeah, I’m a romantic but even me, I still remember updating my fairy tale.  Awesome quote, right? But you know, this comes to the point that I love Patricia Clarkson.  She’s an amazing actress.  Even though she is only a supporting role, she always does a great job. Another supporting role that had me laughing out loud was Woody Harrelson. I’m starting to really like this guy.  This guy is just so enjoyable to see on screen.  Love it! 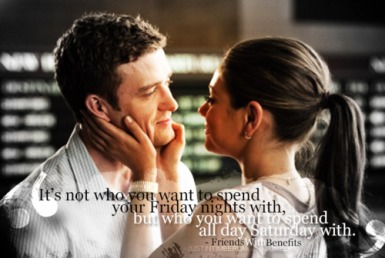 I’m heavily medicated with cough meds right now so I’m going to stop the review here.  Friends With Benefits is an enjoyable and fun romantic comedy.  Its nothing like the best thing I’ve seen but I’d gladly sit down to watch it again.  Mila Kunis and Justin Timberlake have great chemistry and the supporting roles help to make it funny.  And they have some amazing quotes.  That sounds like a good rom-com to me. 🙂 Oh wait, and there’s a cameo with Emma Stone and some tribute to Easy A.  Its pretty awesome!

Have you seen Friends with Benefits? What do you think about Mila Kunis?

Being on meds is the best time to watch romantic comedies (and probably Nicholas Sparks movies).  I’d say this Valentine’s marathon kicked off with a decent start (so much better than the Superbowl game at least)…