Seeing as Dhoom 3 has really taken on quick with a lot of reviews coming, I intend to pull myself in to the farther away theatre to catch it (after the deep freeze temperature leaves Montreal).  Plus, I recently found that Netflix has Dhoom and Dhoom 2 but will expire (or may have expired once this goes up).  So why not give it a viewing, right? So here’s the review of my night of Dhoom 🙂 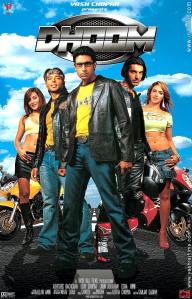 Jai Dixit (Abhishek Bachchan) is newly transferred to Mumbai Police and takes over the case of various heists that have occurred in Mumbai involving a gang of motorcyclists that steal and then leave without being seen.  Employing the help of a talented motorcyclist and mechanic Ali (Uday Chopra), they try to track down the group of thieves and stop them before they complete their next heist.

How to describe Dhoom? Hmm…You know what this reminds me of: a buddy cop action comedy flick mixed with a bit of the later Fast and Furious concept but with motorcycles.  Seeing as I went into this completely blind, like I didn’t know the story much and I didn’t know any of the actors as I’m still new to the Bollywood world, this one definitely started in weird for a good half of it.  I wasn’t really sure if I liked Jai as the serious cop, who started with this very not so serious beginning sequence and for the most part, I wanted to punch Ali because it was really annoying. BUT, after exactly a half (one hour into the movie), it took a quick turn and actually ended in a pretty good way.   The second half after everyone was introduced and settled, the bad guy was in place and we’ve had a lot of random singing and dancing, the action came in and it turned rather gripping and fun to watch.  What pushed it forward was the chemistry between Jai Dixit and the head of the leader, Kabir (played by John Abraham).  Trust me, I’m not spoiling anything because the audience sees both sides pretty clearly but it still manages to keep it pretty intriguing to watch 🙂

Definitely a good start to the series.  I can see why a second one would be made 🙂

Jai Dixit (Abhishek Bachchan) is now partners with Ali (Uday Chopra) as they work together to solve crimes.  However, when Jai’s old college friend Sonali (Bipasha Basu) asking for help in finding and arresting an international heist mastermind who calls himself by Mr. A (Hrithik Roshan). No one has ever seen his face and he never leaves any clues, however, with the help of Jai’s intelligence and another thief, Sunehri (Aishwarya Rai), they are able to track him and follow him to Rio de Janeiro where Mr. A is expected to complete his next heist. 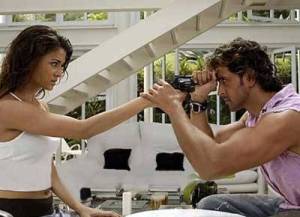 Apparently, IMDB and RT disagree with me but I found that Dhoom 2 is better than the first one.  I’ll tell you why.  For one, we start off with a very much  more intense beginning sequence.  Second, our villain is awesome, smart, witty and oh so very hot.  Eye candy helps, ok? Next, the chemistry between Jai and Ali is better where I don’t want to punch Ali as much anymore and he actually does have some funny moments.  But not only that, Jai and Mr. A’s chemistry playing the cat and mouse is fabulous as well and finally, the love story in this is just awesome.  It adds a little something extra to the mix and makes Mr. A turn a little more human.  Plus, the action sequences in this one are way better than the previous one.  You still have a few fighting little bits that don’t quite make sense in my mind but I can ignore it because this movie is like Fast and Furious, it aims to entertain the audience and it does a really good job at it.

And I guarantee you after watching Dhoom series for a total of over 4 hours means this song is stuck in my head.

I kind of like it 🙂 Along with a whole bunch of pretty high energy songs and some pretty cool dance moves. I guess this is the extra point of why I like it also.

Seeing as you don’t really need to watch the first to watch the second and still pretty much understand, I’d definitely recommend the second one more than the first.  But, its like I said, they both have their redeeming traits that I’d still recommend both.  It was fun and I really can’t wait for Dhoom 3. I already have a girls night set with my best friend to go see it, even if it means a somewhat later showing on a week night, but so far, Dhoom series hasn’t disappointed me and the next one has Aamir Khan and I love the man.  I’m excited 🙂

Have you seen the Dhoom movies? How about the 3rd one? What did you think about it?