In January, a lot of the non-2013 reviews will be because its going to expire on Netflix.  It seems to be a trend these days.  Apparently, a ton of these Bollywood flicks are going away soon, so expect a few of these ;).  This landed me on Ghajini.  Now, why did I even put this in my list? Well, you’ll see in just a little bit..lets get a little synopsis. 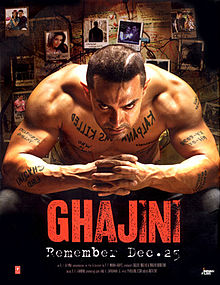 Sanjay Singhania (Aamir Khan) has short term memory loss after an incident.  His memory vanishes every 15 minutes but as still, through tattoos and journals, he has pieced his life together with reminders to plot his revenge for the man responsible for his girlfriend’s death (Asin).  However, when a medical student Sunita (Jiah Khan) and his memory gets in the way, will he be able to trace the man and get his revenge?

I know what you are all thinking: sounds like Memento, right? Just for starters, I love Memento.  Its possibly my first and my most memorable Nolan experience.  So, it goes without saying that with my very new discovery of the world of Bollywood, I had my doubts about this.  But, it is lead by Aamir Khan and he did a fantastic job in 3 Idiots (my review HERE) which remains my favorite Bollywood so far.  And this is my first time watching a thriller suspense drama so I didn’t know if I should be expecting song and dance.

First off, I didn’t hate Ghajini but when you use a storyline so similar to Memento, its hard not to compare.  Memento was genius, Ghajini is just really lengthy.  What really set me off was that I thought that it wouldn’t have song and dance and it did.  I know you’re going “huh?”, right? I know, I know.  But they did do it in a clever way by leading us back to Sanjay and Kalpana’s story and how he ended up where he is now.  So the songs was for when he fell in love and pursued her and just was so attracted, etc.  The love story part of the movie was with that.

Now, I do have to say that, setting it up like this is pretty clever also because it gets us to see Sanjay and just feel bad for his situation. It attaches us to his character, except, I feel like something was missing. I connected to the character but I think I connected more to Kalpana than to him.  I can’t pinpoint what is missing but at a certain point, I got bored and then tired and I think I missed a chunk when I was forcing myself to stay awake. I actually think the length made me lose track of whether I was watching a thriller/suspense/drama or a romantic comedy…And in turn, it gave this little role to the bad guy and the whole revenge thing seemed to go really quickly in a way.

You know what somewhat angers me a little about this.  They  had a good and engaging characters and a pretty good story layout. Sure, it ripped off a bit of Memento and I didn’t expect it to be epic like that but there was nothing wrong with this except its length. The previous Bollywood flicks I watched: I remember saying that it was so good I didn’t even feel like I had sat through a 3 hour movie because it was so entertaining but somehow this one just didn’t get that.

Overall, I just hate saying that its the length that killed it but it was.  I can’t think of any part of dislike on top of that.  The love story was cute, the song and dance was ok (not as good as the others), the suspense was decent as well and seriously, I loved the characters the most.  Kalpana was awesome, lovable, hilarious and witty and Sanjay was great before and after the memory loss.  With that said, Aamir Khan is on my radar now because he’s just totally awesome! 🙂