For the record, I need to start by saying that I’ve never watched any found footage genre of anything, very much less horror.  I know that it became a thing because of Blair Witch Project back so many years ago.  I keep hearing about some other ones that turned out to be good afterwards, but I never really wanted to dive in this genre of movie.  Maybe I’m scared of motion sickness…whatever the reason is, Area 407 is exactly that sort of thing.  Don’t even ask me why I chose it on Netflix.  Okay okay, the main reason was because I didn’t know what to choose at 11pm and I needed to start that marathon but nothing too scary that I couldn’t sleep. I completely went into Area 407 blind…lets see how that turned out.

Trisha (Abigail Schrader) and her older sister Jessie (Samantha Lester) are on a plane headed from New York to Los Angeles to head home for New Year’s. Shortly after the new year rings in, the plane experiences heavy turbulence and crashes in an unknown area with a few survivors: flight attendant Lois (Samantha Sloyan), photo journalist Jimmy (James Lyons), air marshall Laura , and other passengers Tom and Charlie. When Tom goes off to look for his wife, he comes back talking about everyone else dead and seeing something big. When they suddenly hear snarling around them, they realize that there is something big and dangerous out there chasing them down.  Now its to figure out what to do, where to go, how to hide and especially how to get out of there.

My first experience of found footage videos was…how to call it…really frustrating.  I’m not saying the movie itself is bad, lets just say I’m indifferent. I never got exceptionally frightened but they had a good thing going at some parts.  The movie was ridiculously dark and there was a lot of looking at running feet. I get it though, there was no light and it was no man’s land.  Despite IMDB ruining it for everyone and not really going further into detail either, this was in fact a government testing facility apparently.  Why there were giant creatures loose, I have no idea.  The story was flawed, in its own ways and it was just trying to play with the mysterious unknown where every factor is unclear and all you do is run and survive as much as possible. Aside from that, there was A LOT of screaming, yelling, whining, arguing, etc. I get the panic, I really do.  I’d probably be freaked out if I was in that situation but in a calm way because for one, instinctively, you’d want to shut up and not let whatever predator is out there hear you or so that you can hear them…no? 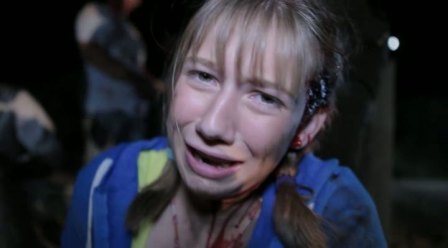 The movie starts with this blonde girl right above, Trisha.  She made me automatically regret turning on this movie even before anything crazy at happen.  You know annoying little brats with whiny voices, yup, thats her.  And she talks all the time, then she screams and whines all the time, and says the stupidest stuff.  If I had a unknown gigantic predator on my ass, just saying, if I twisted my ankle a little, I’ll pull myself up and run because the painful thought of getting bitten alive is more than my foot. Plus, adrenaline rush usually numbs most of other pains in my experience. But maybe that was her character design, how do I know? There was the other guy who played Charlie who was equally annoying but in the grown up man reacting in a defensive manner related to panic and I’m sure that guy was just really trying do the annoying role and I did want to punch his face when he opened his mouth.  Was that just double standards? Not to me at least… 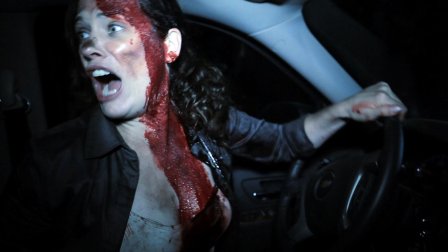 I admit I had problems with Area 407.  For one, the movie title was irrelevant.  Second, there was some rather annoying characters.  Third, the camera was way shaky when they were safe, imagine when there was action.  Four, the story had so many flaws.  BUT, there are positives, okay? I’m going to be honest and say this isn’t an extremely bad movie because of that.  Some characters were put in to handle the situation and even though character development was almost none, it was a predator movie so I guess, it had to just have a bunch of unknown factors, some that worked well.  Plus, they tried to give a twist to the ending.  I personally saw it coming right at the beginning of the last scene because thats just how these sort of things happen.  Plus, I really hate the fact that even though the movie doesn’t want you to know what the actual predator looks like, the poster actually gives you a pretty good idea.  Take a guess..I’m sure all of you will get it right 🙂

I’m not sure if I want to recommend this to anyone but if you like this genre, maybe you’ll have more enjoyment than I did.  Its not a bad premise but I just thought it could’ve been a lot better and well, all these characters and their actors/actresses associated with it was not great but some were decent.  At some parts, I think that if they did differently somehow, it could be a better movie.  Just be warned, lots of screaming is here…so lower the volume to avoid any headaches.  I know I kept reducing the volume as the movie went along. But hey, at least if you look at IMDB trivia, this was filmed over 5 days, so what more should I expect, right?

Not exactly a great start to the movie marathon, but at least its warmed up the whole adrenaline rush and next one, should be better 🙂 I might still have to do the spontaneous thing until the boyfriend has time to sit down and watch those paranormal ones…because I’m not watching those by myself.

Are you a fan of the found footage genre? How about predators?