I watched this over the weekend so before the Halloween month actually starts, I wanted to wrap up the loose ends first 🙂

Another Earth has been on Netflix list for a while.  I remembering reading something about it a while back that interested me about the movie but seeing as I have a horrible memory that all I had to go on and not much else.  I don’t know the cast, the director or even much about the story but its going to not be available after October 1st, so I figured I’d give it a shot 🙂 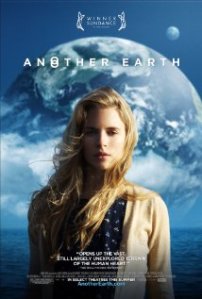 Rhoda William is a smart 17 year old who had just gotten accepted into MIT and after a celebration party, still drunk and decides to head home and on the way, she hears about the appearance of a new planet close to Earth, which they name Earth 2.  As she looks up, she crashes into John’s car, killing his pregnant wife and young son and putting him into a coma at the same time.  After four years of prison, Rhoda is released and tries to get her life back on track.  When she tries to apologize and seek forgiveness for what she did, she doesn’t have the nerve to do it and ends up telling a lie that draws her a little closer to John. At the same time, she enters herself into a contest to win a ride to Earth 2 which is believed to be the mirror of Earth itself with the a second version of everyone.

Another Earth is a really deep movie with amazing visuals and an extremely unique concept.  There’s a lot of soul searching, forgiving others and ourselves for past mistakes and learning to grow up and be responsible for our actions.  Like I said, it really gives us a lot to think about during and after the movie ends.  Lets just say, I started regretting watching it on Saturday night…

The story involves two people: our main actress, Rhoda, played by Brit Marling and the survivor John, played by William Mapother.  I’ve never even heard of Brit Marling before this but she is absolutely amazing.  She interprets the role in such a way that it really makes you feel the struggle that she’s going through, the regrets, and the want to be forgiven and to just have a chance to start over.  Her character portrayal reaches out to the audience and pulls them right alongside her story as the plot develops. Playing alongside is yet another actor I’ve never seen.  Although his part is not as large in some ways, I still believe the William Mapother’s portrayal of John was enough to allow us to see that he also had struggles that he dealt with in his own way.  What was there to do and how do you lift yourself back up after losing your loved ones? How do you move on with life? The fear of losing what you have and perhaps even fear of even more change.

I’m personally a musical person and this movie has a touching soundtrack to help enhance the feelings that the audience should feel along with the characters.  Plus, it takes into consideration that one of the characters, John, was a composer and uses that to lead into certain emotions that they want to emphasize on at certain parts.

Another Earth is a deep soul searching journey with a beautiful concept paired with emotional music and stunning visuals.  If you are ready to go for a heavier drama, this one would definitely be a great choice.

Have you seen Another Earth? What did you think about it?