I can’t believe that its been 4 weeks since I said that I’d go see Riddick.  Luckily there hasn’t been enough blockbusters to knock it off my theatres English movie showings, so my boyfriend and I had our little date night and went to check that out before we missed the chance. First of all, keep in mind that Riddick is more my boyfriend’s interest and my interest solely lies with Vin Diesel. I do have to admit I did enjoy Pitch Black quite a bit. You can check out my review HERE. 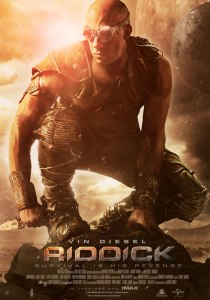 Left and betrayed on a deserted scorching planet, Riddick has to figure out how to get back his animal instincts and to adapt to this planet and seek a way out.  After encountering creatures and finally making it to an area with the essential uncontaminated water, he realizes that there is a storm coming and one that will bring along a lot of deadly breed of predators.  In desperation, he summons an emergency beacon which brings in first a mercenary ship that wants to take him back dead and the other brings back memories and connections of the past. 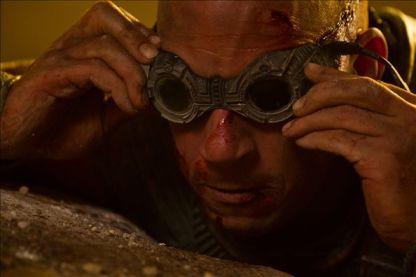 A lot of Riddick is very much the same vibe that Pitch Black has.  That, to me, also means that there is a lot to love. Its not the snorefest that The Chronicles of Riddick is.  If you think differently of that second one, I’m sorry…I’ve struggled to watch it two times and honestly, I’m scared of watching it again, well, unless I want to pass out and sleep.  That might not be such a bad idea. Either way, this movie is great because its similar to the first one.  The characters are a decent mesh with some that are annoying and some not as much.  Also, this movie is 13 years after Pitch Black so it has the advantage of having better visuals. What does suffer is because of the similarity, there’s a lot of predictability in there as well.  That might decrease the impact that the first had, however, I still found it surprisingly entertaining. 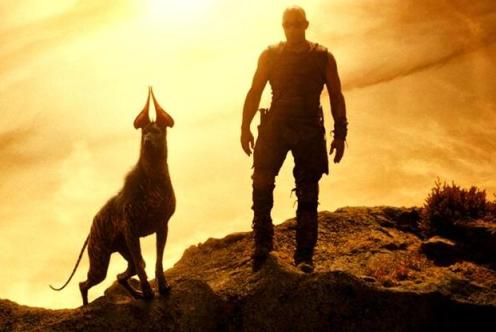 Vin Diesel is absolutely awesome.  I know I’m biased but he is.  As Riddick, he is kick ass.  No matter how predictable he is, he’s presence dominates the screen.  When he threatens the people, I can’t help but chuckle and just can’t wait for how he’s going to execute it.  He’s not a great actor but he does deliver a great performance.    He’s just so tough and that makes him very attractive to me. You know, the bad boy vibe. Plus, when he mounts onto another that has a motor, I just think he’s perfect since it reminds me of his role as Dom. 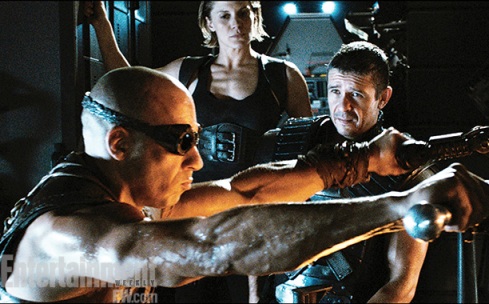 Aside from Vin Diesel, the rest of the characters were alright.  They aren’t known to me in particular but they all play off of each other well enough to make it all work out.  The character that has the most story and purpose other than Riddick is Boss Johns played by Matt Nable. Thats possibly the only reason why you’d want to see Pitch Black before heading out to see this one.  That part was slightly predictable, for those who know what I’m talking about, although for a moment I did doubt how it would end.  Just a little doubt.  I also liked how they gave him a little companion that was adorable to bits. 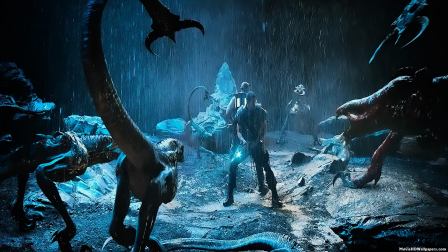 The one thing that somewhat got to me was that at one point, I started feeling like it was getting lengthy and dragging out, but then it ended in the next 15 minutes or so. I guess it somewhat makes up for it.  That feeling was weird when I saw that Pitch Black was only 10 minutes shorter than this one.  Lots of comparisons going on here but maybe its because its so similar and still grabs my attention for the same length of time means this one succeeded? I’m not exactly sure.  I’m still debating if that qualifies as a problem… 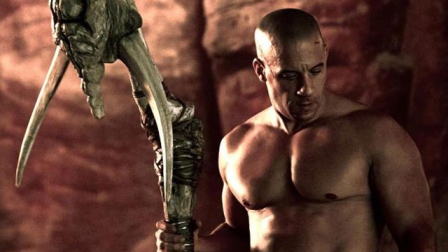 This review is getting in the indecisive point. Overall, I had fun with Riddick.  It was entertaining and there was some funny, sarcastic lines for Riddick.  Vin Diesel still rules in that role and I’d possibly gladly see him in another one.  Hell, I’d see anything with him if it means he’ll be all tough and macho.  This movie had a good amount of action and some thrill but it also had some good humor that  worked for me. The characters may not be known but deliver a decent performance all around. If you liked Pitch Black, I’d say you will find a good bit of enjoyment in Riddick so I’d recommend it 🙂

What did you think of Riddick? What are your thoughts on Vin Diesel? Your favorite role that he did?