After some debate, I decided that this is the first sequel recommendation to appear here mostly because a week or two ago, I reviewed Romancing the Stone (review HERE) and Smash from Smashing from Life told me that The Jewel of the Nile was a great sequel to check out 🙂 Smash is an awesome girl who lives in Toronto.  Honestly, I’m new to her blog but I love everything she posts up and she definitely should get some support to bring her smiles so head on over and show her some love.  I know she did an amazing job when she blogged about a potential location for my upcoming visit to Toronto  HERE 🙂

Picking up six months after the first one ends, Joan Wilder (Kathleen Turner) has sailed around the world with her boyfriend and adventurer Jack Colton (Michael Douglas).  All the romance starts being a bit too much and she wants to go back to New York and try to get her career back as she still can’t find the reality in her books now.  Because of that, she is also struggling to finish up her latest book.  Its at this time, Omar (Spiros Focas), a soon- to-be emperor of the Nile hopes to have her write his biography about how he unites the tribes in the Nile.  She agrees however Jack doesn’t and decides to sail the Mediterranean instead.  At this time, Tarak (Paul David Magid), a man from a tribe in Nile comes to him and asks him and coincidentally Ralph (Danny DeVito)  to get back the Jewel of the Nile.  He agrees and as Joan also sees through the plans of Omar, she finds a way to escape and eventually joins up and together they try to make everything right again in a whole new adventure. 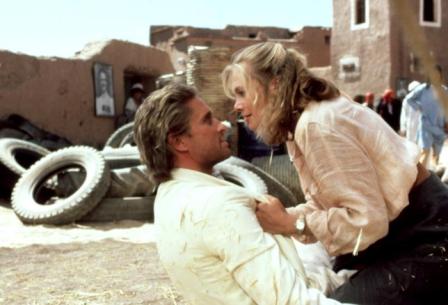 The Jewel of the Nile was definitely a fun sequel.  For the most part, I actually enjoyed it more than the first one.  The only deal was that Michael Douglas was not as wild and adventurous in his jungle suit.  He was actually in a suit through most of it, but still I still found his performance quite awesome and with Kathleen Turner, they are quite a great on-screen couple.  This one was entertaining even though I found some scenes showing their age a lot more than the previous one.

I mentioned it a bit on the previous paragraph but the characters in this one actually had more room to shine. For one, Kathleen Turner’s Joan Wilder proved that even though she fell into the over thinking relationships in the beginning, she was still able to bring out that daring and taking chances abilities that she learned from Jack in the previous movie and take care of herself when in danger.  Michael Douglas’s  Jack also had the character development to getting into the whole commitment and facing the expressing his feelings that it seems he was scared of before (or is it settling down that he’s scared of). Still, the romance between them and little quarrels always makes it entertaining.In this one, we still have Danny DeVito with a bigger role this time around and he is definitely the additional comic relief.

The Jewel of the Nile was a fun adventure through the desert with lots of laughs.  There was a lot of action also with out of control planes, fist fights, chases through the desert and fires, shooting and explosions.  What else can I say? Its just crazy entertaining.  I really enjoyed it and its like I said, I might actually have liked it better than the first 🙂 Maybe you disagree but lets just agree to disagree.  I definitely recommend it, especially if you enjoyed the first one and happened to not have caught this one yet.