Because I started the recommendations on the second week of August, I decided to do one more week to make it a solid month of recommendations 🙂 Next up, we have Natasha at Film and Things with her suggestion to see Shaun of the Dead.  I’ve been meaning to see this a long time as I’m a huge fan of zombie movies. 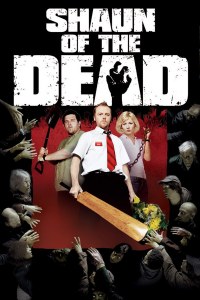 Shaun (Simon Pegg) lives with two friends, Pete and Ed (Nick Frost).  Ed doesn’t really do much, doesn’t have a lot of friends and doesn’t get along with Pete and relies heavily on Shaun.  However, Shaun’s girlfriend Liz (Kate Ashfield) doesn’t want her life to continue in the same boring pattern and when he fails to comply, she decides to leave him.  Right at this time, Shaun decides to pick up his life and get back Liz when the world is attacked with a possible zombie apocalypse. He decides its his chance to show that he can make something of himself by saving the day and he proceeds to protect his mom and stepfather (Bill Nighy) and also protect Liz and her two friends,Dianne (Lucy Davis) and David (Dylan Moran).

I’m a huge fan of British horror (or British anything).  However, I did learn that as much as Hot Fuzz was a decent movie, I wasn’t so interested in it so I was a bit reluctant to watch this.  Shaun of the Dead is possibly 1000 times better than Hot Fuzz in my opinion.  Its funny and crazy entertaining.  There was some shots where you can tell they were trying to build a bit of intensity and man, those zombies looked pretty good.  If they didn’t mix in such a good amount of hilarious moments, I’d actually might have been a bit creeped out.

Shaun of the Dead is led by a great cast.  I love Simon Pegg.  His humor is totally out of the world.  In this, he leads some of the best laughs and his bromance sort of relationship with Nick Frost’s Ed is just hilarious.  Plus, he has awesome expressions and reactions.  The dialogue in this was witty and sarcastic at times which really worked for me. Moreover, Bill Nighy is amazing all the time in big or smaller roles and he was in this and I found it funny as always!

Seriously though, do you really need me to tell you how awesome Shaun of the Dead is? I’m pretty sure everyone already knows about it seeing as almost everyone went to see The World’s End this summer.  BUT if you really do, I really recommend it extremely highly.  You should definitely give this original, witty and fun movie a go and I’m pretty sure you will like to some degree.

A huge thanks to Natasha for telling me to watch this because it was totally awesome and she is awesome as she just completed her short film One Bitten, Twice Shy.  You really should check out her fantastic trailer that she put together :). You can check out more info on her short film HERE.