My original intention was to finish reading World War Z before the movie hit theatres, however, that simply didn’t happen.  There were many reasons that I decided to see the movie without finishing the book, the main one being that the adapted version had about 10% correlation to the book.  If you happened to miss the review, you could check it out HERE! Moving on… 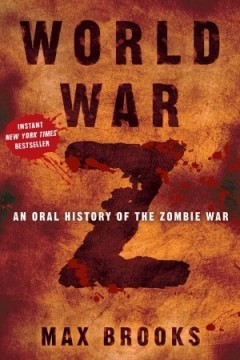 World War Z by Max Brooks is about the aftermath of the world surviving this zombie apocalypse.  The story is written as the person (Max Brooks) who interviews many of the men and women who witnessed it first hand in different countries with different backgrounds, contributing and taking advantage to or of the situation as it happened.  In their stories, we see the underlying social, economic, technological, political, etc issues.  The interviews and stories are separated in the phases of this war the almost ended humanity, from the warnings to the blaming, the panic, how it evolved in USA and then relating it to all around the world and eventually the way it ended, so to say, revealing the world they lived in as everyone rebuilds their life and many situations are reversed.

What started as a rather slow buildup in the beginning caught on slowly as each story progressed in their way and in their own direction. I supposed it was intended to be like that as in recounting the early stages of the zombie apocalypse and the warnings was slower.  It also reflects on the issues of ignorance.  The warnings were ignored and many eventually in the next part blamed it on the government or leaders, whichever organization for not acting at the correct time which would have possibly prevented this from happening or at least nipped it in the bud before it became a worldwide pandemic.

There was one part where I felt (as a Canadian) that there was a very pessimistic view of the American value.  I just wonder if an American reading this would feel that Max Brooks had a very strong feeling of hatred towards the population’s tendency to be self-centered and ignorant because for a few stories in the section of blame that was what I read between the lines.  However, those parts were also the ones that peaked my interest in the whole book from there.  However, if you think about it, many times we live our own lives and ignore a lot of issues going on around us until it is too late so maybe he was just using one population to reflect how many common people would react to a situation like this if it were to occur.

For the most part, this book was very intriguing.  The way it was set up was also very good.  The only issue I had was as I got to the end, I couldn’t remember the names anymore and in the last section when some of the previously interviewed men and women were saying their final parts and what they got out of this war, I had to flip back to the front and look at the countries and recheck their story to not be confused with what they would say.  That was slightly frustrating.  If it had an index or table of contents of the countries, that would’ve helped.  Just saying…maybe a lot of other people have better memory than me, but sometimes, after reading 30 different stories over 2 weeks, it gets a bit hard to recount it.

Overall, a great concept and an interesting read.  It spread through the worldwide spectrum and reflected the urgency and desperate situation that the zombie apocalypse brought and the different ways people fought it in different countries.  The majority of the stories were ones that would tug the heartstrings or make you sympathize or connect with the character, some other ones would make you wince in anger at the negative effects and how some people still was too selfish to see the big picture and many times causing it to be worse.  Its an eye-opener in general of human nature when put in the most gravest danger.

Have you read this before? How did you feel about it?