Before I acknowledged the existence of the movies of The Girl with the Dragon Tattoo, I started reading the trilogy.  That series of book is possibly one of the most intense reads I’ve ever experienced.  Every book is a page-turner based on the issue of hatred and abuse towards women.  It shows it in one of the most extreme ways.  With the fantastic character design in their novel of Lisbeth Salander, it builds for a very intriguing story to be transformed to the big screen.  This originally being a Swedish novel, it was adapted in Sweden first.  Its success lead to this Hollywood remake. 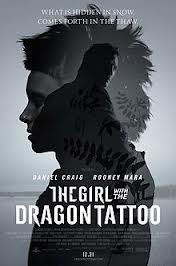 In the midst of a scandal involving a Swedish journalist Mikael Blomkvist (Daniel Craig), he accepts an offer by wealthy businessman Henrik Vanger (Christopher Plummer) to go to the countryside residence called Hedestad to investigate the disappearance and possible death of his beloved niece, Harriet 40 years ago.  As the killer still imitates the actions of his niece by sending him a gift at a certain time of year, he is determined to figure out what happened to her before he runs out of time.  As the case progresses, he requests the help of a young and very smart computer hacker Lisbeth Salander (Rooney Mara) who appears rebellious, different and peculiar in her ways.  As the investigation thickens, they follow the clues that unfold before them one by one.

Lets start by saying that I’ve read the novel (and all three of them) and I’ve seen the Swedish movies (also all three), this one is a decent remake but it lacks a little flare to it.

The most apparent lacking feature of it has to be in the unique character of Lisbeth Salander. The original featured Noomi Rapace as Lisbeth Salander and she does such an outstanding job that it makes anyone else doing this role not as appealing.  Rooney Mara has a bit of a different style design and she’s not as strong of a character to play that role.  She does pull through and emote to the best that she can, but having seen the original, I can’t help but to compare just a little. However, if I do think about her as a standalone character, she does do a fairly outstanding job and commits to her role.  Its a difficult character to portray and she is very convincing.

Daniel Craig plays the journalist Mikael Blomkvist and he does a very great portrayal.  I enjoy Daniel Craig’s acting for the most part.  He’s never particularly disappointed me in any movie.  Maybe some smaller roles perhaps, but nothing I remember off the top of my head.  He has what Mikael Blomkvist’s character is all about down and every moment of his role dragged us deeper into the story itself.

In addition, we had the supporting actors of Christopher Plummer who plays the elderly Henrik Vanger who shows the pain and frustration he’s endured over the years of not only adapting with the loss of a loved one, but also the feeling of being mocked by whoever committed this crime.  His desperation to find the truth makes us question what really happens and want to learn more about the story itself.  The second supporting actor I’d like to mention is Stellan Skarsgaard who plays Martin Vanger.  He’s the successor of the Vanger Enterprises and doesn’t particularly show up a lot in the movie but he has a very complex role to play at the same time.

Other than having a pretty awesome cast in this remake, what really worked was David Fincher as the director.  The setup, the scenery, how he shot it and the lighting really adds to this movie as a whole. It gives it a captivating touch but at the same time, in many instances, he also sets it up to fully experience the brutality behind the whole concept of what the story itself was portraying: the disrespect, the degrading and abuse towards women.

The Girl with the Dragon Tattoo is probably one of the best remakes I’ve seen ever.  Its a mesmerizing movie that brings out the brutal situation that its set to have.  It also is filmed with the brilliant David Fincher plus it has an amazing cast that does a great job at bring alive the characters in the novel.  Its definitely worth a viewing, although if you do get the chance, the original should still be the first choice 😉 BUT, this is a worthy film to watch!