This week’s star is rhubarb! I love rhubarb to bits! Right now, my garden has one plant of it and its growing like mad. Its probably from all the rainfall that has fallen in the past 2 weeks…NOW, I’m in emergency baking mode.  My mom has put down orders to get rid of ’em all this coming week!

First up had to be my first trial for a Strawberry Rhubarb Pie! Who else loves it? Because I am obsessed with the store-bought ones…of course, its always more natural to make it at home.  PLUS, I had a pie shell that needed to be used for baking.  Usually, I’d make my own but hey, lets take it easy for once…especially since I’m owing another blogger a recipe to go up that has to be postponed just a little bit while I get rid of the rhubarb.  Next week, it’ll be all about chocolate..but today, it’ll have to be about rhubarb!

I usually venture onto Martha Stewart‘s site to find some recipes but her site (at least on my tablet, haven’t checked on my laptop) is ridiculous to understand how to make the damn recipe so I gave up and googled it which led to a recipe on the Food Network! C’mon, that’s gotta be sure fire, right?

For the recipe, you can find it right here: http://www.foodnetwork.ca/recipes/Dessert/Berries/recipe.html?dishid=4042 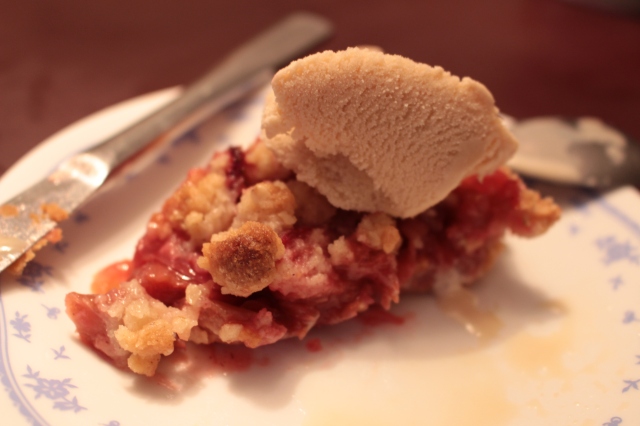 We all had rather different opinions on this pie actually.  My boyfriend started it off and ate it without the crumble topping and thought it was SUPER SOUR! With the crumble and after a few bites, he slowly adapted to it.  Because he said that, I went off to the freezer and topped mine off with a scope of Maple flavored Soy based Ice Cream.  I found it still a little sour but when you eat it as a whole experience, it tasted pretty good.  Rhubarb is supposed to be a bit more sour in taste so, it makes sense.  My mom was the only one who said that it wasn’t sour and she said that she liked the fact that it was just the crumble topping that felt like it was sugary to balance the taste.

Other than that, the texture turned out great plus, it looks and smells awesome! I might still search up another recipe or modify this one a little bit the next time I make it. In the meantime, I’m going to search up what to make with the rest of the rhubarb.

Last year, I made it some Baked Rhubarb (HERE), Rhubarb Crisp (HERE) and Strawberry Rhubarb Crumb Bars (HERE) which were all quite delish! Check it out if you’re interested! 🙂

Any suggestions for what else I could make?