There is a magic with musicals that I love.  A lot of times, they are cheesy and stupid, even done in a very incomplete way where it either turns into a concert or the story doesn’t flow well or whatnot.  From the first time I’ve seen Mamma Mia!, I just love it.  Does it mean that its a great movie objectively? I’m not that sure…

On a beautiful Greek island, we enter into the story of Sophie (Amanda Seyfried) who sends 3 invitations out to 3 unknown men who could possibly be her father to come to her wedding with Sky (Dominic Cooper) as an invite from her mother Donna (Meryl Streep).  Her mother has never mentioned about her father but she firmly believes that knowing her father will help her find herself.  She also thought that she’s be able to determine them at first glance.  When all three possible fathers, Bill Anderson (Stellan Skarsgard), Sam Carmichael (Pierce Brosnan) and Harry Bright (Colin Firth) show up, she realizes its harder than she thought to know and while hiding them as a “surprise” for her mother, she seeks the help of her best friends.  In the meantime, Donna finds out and tries to get them off the island with the help of her two best friends, Rosie (Julie Walters) and Tanya (Christina Baranski).  All the plot is set to the tune of ABBA hits!

Let me just get one thing straight.  If you are sitting down to ANY musical, you should be in this because you enjoy this sort of thing, especially the cheesy, silly renditions.  Mamma Mia is an adaptation of the stage musical.  Its meant to be fun and mildly enjoyable and entertaining.  You really have to be ready to embrace that in order to enjoy it.  The over exaggerated expressions, the constant emerging into music and this case very good original music and to just close your mind off and enjoy the familiar actors and actresses prancing and dancing on the screen.

I buy these things fully and thoroughly and thats why I like most musicals.  Mamma Mia is one that I go to when I’m feeling sick or down.  Why? Because how can you not tap your feet to any of the ABBA tunes.  Even if its not ABBA doing them and this cast isn’t exactly the best in singing.  Most of the songs is energetic and entertaining to watch.  If you hate everything else, how can you resist moving to Dancing Queen? I know I can’t! 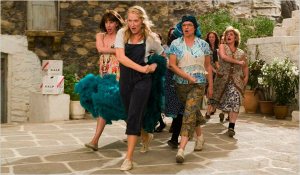 What I am starting to realize is that in any movie that Meryl Streep is in, even if it doesn’t do great overall, you can expect it to be enjoyable miles more than it is just because of Meryl Streep.  This one is no exception.  However, there is one highlight of this one.  Thats Pierce Brosnan not being James Bond ;).  He’s singing desperate love songs, getting nostalgic and shimmying away with silly dance moves.  Pierce Brosnan’s James Bond did not ever do that in my recollection.  Plus, his singing isn’t all that great but there was something charming as always about watching Brosnan get in the groove.  Along with Stellan Skarsgard and Colin Firth, the 3 men had some pretty funny moments.  Everyone was in threes and so was Donna and the Dynamos.  On that note,  Tanya and Rosie was hilarious characters.

Mamma Mia! is one of my absolutely favorite musicals to watch.  It makes me feel good and in the whole dancing and singing mood.  Happy times! Its not a masterpiece of course and the singing isn’t absolutely great but the cast do a great job doing what they do best to give us a nice mix of heartwarming, soul seeking, funny and silly moments throughout to make this an entertaining flick!