Saturday movie night with my best friend ended up being her choice out of my unseen movies pile! We love watching animation together and its been forever since we’ve actually sat down at home eating dinner together and just enjoy a movie.  Last movie we saw was in the theatres last year, Brave and it was totally awesome 😉 Rise of the Guardians was one that we believe we saw the preview of when we went to see Brave.

The Four Guardians have always taken care of the hopes and beliefs and happiness of all the kids around the world.  They consisted of a russian accent Santa Claus called North (Alec Baldwin), Easter Bunny called Bunny (Hugh Jackman), Tooth Fairy called Tooth (Isla Fisher) and Sandman called Sandy who doesn’t talk.  When North sees that the Boogeyman called Pitch, has come out of hiding and used his darkness to try to take over the Earth, he calls up the Guardians for a meeting.  When asking advice from the moon, they see that they are to summon a 5th Guardian, who is a mischievous Jack Frost (Chris Pine). This comes as a surprise to both Jack Frost and the Guardians.  As Pitch launches his plan to come out of hiding and destroy every child’s dreams and happiness, the Guardians along with Jack Frost needs to find a way to work together and figure out how to stop him before its too late.

Was 2012 the year of awesome animated flicks? I loved The Lorax (although there was a fair share that didn’t).  I absolutely adored Brave and now I had so much fun with Rise of the Guardians! I just totally blame the promotional team for this one.  It was so awesome but yet the trailers, not for one second, made me want to go see this.

This movie is definitely one that I found was really magical.  Its suitable for kids but gives the adults a good sense of adventure as well.  Its not dumb childish humor but actually rather witty dialogue.  Bringing in the mythical characters that a lot of children do (or adults have) believe in and setting them as the heroes of the story makes it very unique.  It also gives them a meaning as we are revealed that even our heroes before they become immortal have to earn their way to be who they are and each one had a life before this one. 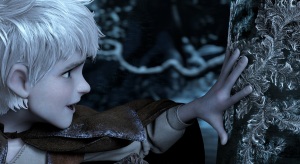 All the characters were designed really well.  My best friend (and I) particularly loved how they made North have a Russian accent.  I thought that was really nifty and cool.  Easter Bunny was made all ninja style and he rocked the screen under Hugh Jackman’s voiceover. That makes sense since he has to jump and hop everywhere.  His interaction with everyone was most of the comic relief.  Chris Pine did a very good Jack Frost, although I almost didn’t even recognize his voice at first.  His story was the main focus throughout this flick so his character grew on me as it progressed.

This flick had Pitch as the villain. I think he did so amazing.  For one, he has one of the best voices in the business and its actually sad that I don’t recall him doing any voice work before.  He rarely does bad guys but somehow I felt he was a good level of evil to make everything work out.

One last thing that I really loved was the visuals.  The way the designed each of the “palaces” where the guardians lived were all very creative.  They each gave a beauty and imaginative.  The way the characters would use their magic and the colors they used were absolutely amazing.  I may have talked about this last but it was the big element that kept drawing me into the world of the Guardians.

This flick had a good amount of action to hold both children and adults but in no time did it feel that it was too intense or inappropriate for children at least.  They kept reminding us that we all have that child in us.  I’d recommend not only for a fun magical adventure but also that it carries a deeper meaning that we need to find our center.  No one will treat situations the same way but we all are unique and that gives us our advantage.