If you take a nice stroll around Walmart or any movie store, it always has interesting movies to find.  I had heard about this movie last year but seeing in front of me, the title Le Magasin des Suicides or english title The Suicide Shop caught me right away.  I haven’t done an animated movie in a bit (right?). Still, from the title, you can already know that maybe young children might not want to see this.  Let’s reserve this one for adults, shall we?

English slogan: Your life is a failure, make your death a success!

Le Magasin des Suicides is based on a dark comic novel  by Jean Teule (which I have never read or heard of). Since 1854, the Tavuche family have been providing the depressed population a efficient and effective way to die, in whatever way they would like.  Their business thrived on aiding others remove their miseries through suicide successfully.  Now it was in the hands of pessimistic Mishima (Bernard Alane) and his depressing wife, Lucerce (Isabelle Spade).  They have a boy Vincent (Laurent Gendron) and a daughter Marilyn (Isabelle Giami) who are both depressed in their own way. One day, Lucerce gives birth to a baby boy who they name Alan (Kacey Mottet Klein).  He is different because he smiles and is a happy child.  They try every possible and desperate way to condition him to become one with the miserable family and to not affect the enduring family business.

This little animation is actually a musical.  The story is intertwined constantly with musical numbers from everyone.  The concept is actually quite interesting and its a very unique.  Despite it being a bit bizarre, it was definitely on the fun side.  I really like dark humor so this really worked for me.  It was actually what had drawn me in in the first place. I’ll probably try and find Jean Teule’s comic novel now.  It might be interesting just to see the original artwork and story to see what was changed (if anything). 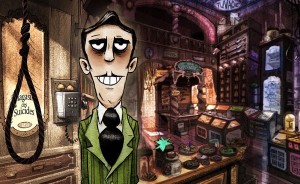 Another thing is that this director is one that a friend of mine had talked about with his previous work on Girl on the Bridge.  I haven’t been able to find that movie yet, but after this one, I’d love to check it out.  Seems that this director is drawn into such depressing, soul searching sort of stories.  I really don’t have much to comment on  the voice work.  I don’t know any of the actors who did the voices but I think they did a pretty great job.  The characters  and the story itself intrigued me right from the start.  The dark broken city and the black hues used for it contrasted well with the store`s glow (maybe as a sign for of hope for the depressed to have a good end).

I personally enjoyed this flick a lot. It is however very much geared towards adults because of this dark humor and one scene of animated nudity. Is that even how you call that? However, the musical aspect gives it a nice little entertainment.  The story is quite unique and as I haven’t read the source material, I found it very intriguing.  Its definitely not going to be for everyone but to me it was a pretty awesome concept 🙂

Are you into darker animated flicks?