Its not even Halloween and over here we’re getting into the horror movies already. I’ve seen a few this year with The Woman in Black and Pulse 2. The version this spanish horror thriller The Orphanage that I bought only had subtitles and not dubbed, its going to be a new experience which will force me to watch every single minute of it. *shivers* Especially with my boyfriend constantly pulling down the blanket I was using to cover half my face. 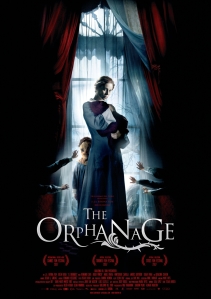 In a big orphanage located on the seaside, Laura(Belen Rueda) was adopted.  Many years later when she is older, married and has her own family.  Laura and her husband Carlos (Fernando Cayo) decide to come back with their son Simon (Roger Princep) to set up a home for mentally disabled children.  As they are slowly settling in, they start seeing that Simon starts acting bizarre as he is making more and more imaginary friends. When Laura one day finds out that her son is playing a game that seems a lot more real than she had first thought, she starts believing that maybe there is something a bit more that has entered into the house.  As things start to get worse with her son’s mysterious disappearance, she tries whatever possible to find him.

Its hard to really explain this (or any) Guillermo Del Torro type of production piece.  That was one of the main reasons I watched this.  He didn’t direct it but still, I really enjoyed how the director Bayona carried this horror thriller out.  As mentioned above, I had to watch this whole movie and this movie taps into a lot of my favorite sort of stuff.  While I was searching for image, there is one that had a reason of why we like The Orphanage.  Although I’m worried that this might be a spoiler (which I don’t want to include).  So here is the link: http://horror-movie-confessions.tumblr.com/post/10440747973/i-loved-how-guillermo-del-toro-in-the-orphanage. If you have seen this, do you agree with me?

This is really an awesome horror thriller. However, I had a hard time actually determining whether this was the right category at the end.  People who have seen this would like to know that I loved the ending.  It totally turned it the other way.  It makes me think that any movie with Del Torro always has these awesome twisty endings that just surprise you.  I didn’t figure out the twist, but my boyfriend went “OH NO” right when he did and it hit me then.  I loved the originality of the ending. 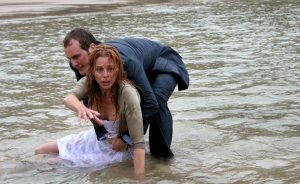 Other than jumping straight to the ending, what made this movie totally a must-see is because it really  kept me on the edge wondering and waiting and expecting for something to happen.  Sometimes, I was right and sometimes, I just wasn’t.  It kept throwing out ideas and possibilities to what would come afterwards and eventually by the end, I really had no idea how this was going to go.

Another thing that really scares me in horror movies more than anything are creepy children.  I think I talked about that when I reviewed A Woman in Black (click on the title for the link). Coming from Asian background, I believe in the existence of ghosts and spirits so those things hit me in a psychological way.  I’m frightfully scared of the dark and that was the tone of this movie for the most part: darkness.

My boyfriend did find it a bit slow and not his type of horror movie but for me, it did EVERYTHING. I highly recommend it.  Dark, creepy children, ghosts/spirits, an interesting premise in this awesome horror thriller.  If you  like Del Toro, this is for you. If you like ghosts, spirits, creepy children, horror movies, surprise and some connecting the dots, then this is definitely for you.  I LOVE IT!!! 🙂