As I’m away from home this weekend, I still feel a bit bad that I don’t have any recipes prepared for everyone.  So I’m going to do some food reviews from Toronto restaurants that I visit.  Coming to Toronto for me is opening my horizons to the awesomeness of Chinese cuisine that doesn’t exist in Montreal. I’ve mentioned before that for health reasons, my body doesn’t digest the Chinese food at restaurants in Montreal, which is why when I get to anywhere else like Toronto or Hong Kong, I go crazy eating.  This time, we’re with a bigger group than my usual company of 2 and with someone else who can give us suggestions, we arrived in a restaurant that originally we thought was called Cafe Cogo.  Upon arrival, we learned that the restaurant had recently changed their name and its now called Skyview Fusion Cuisine.

The whole group didn’t eat together but we did have a decent group of 7 people (including me) dining together which gave us more choices to order.  We ended up have 5 dishes plus an appetizer soup to start off and ended with a sweet soup. 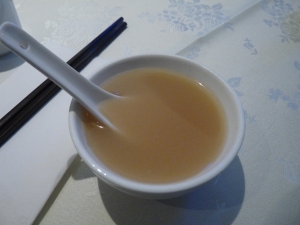 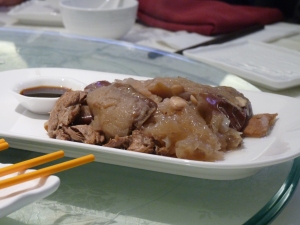 Our soup appetizer was a Chinese soup with some lean meat with apples and white fungus.  What made them different from other restaurants is the fact that they separated the contents of the soup onto a plate as a side dish.  Not everyone likes the soup contents because all the flavor is already in the soup, but some people do like to munch on it and this fulfills everyone’s needs. 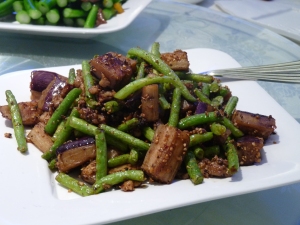 First up is the Stir Fried Eggplants and Green beans with Minced meat.  The seasoning on this was really delicious.  I usually eat this with just green beans and I’m not really a big eggplant fan but this one was good because the eggplant was cooked not too soggy.  It had a stiffer texture. However, someone had mentioned that was also something that was preferred for others.  So this is definitely a personal preference. 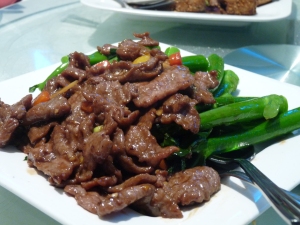 Second dish that came was stir fried beef with chinese broccoli and it also had a bit of chopped up vegetables on the side.  I love Chinese broccoli to death.  Its probably my favorite vegetable and they made this pretty decently.  Its a rather common Chinese dish and the addition of the side extra vegetables added a different touch. 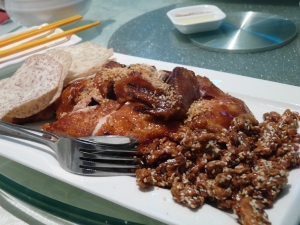 We chose the option of half a chicken as to not have any leftovers. I didn’t get a chance to try the Taro Crisps but this is super original and everyone who did try it said that it was really good.  On the right side you can see walnuts enrobed in sesame.  This was a huge hit and I’d assume that its something signature here because it was also offered on the complimentary dishes when we sat down.  However, Chicken is the star here.  I love eating chicken.  Its my favorite meat.  A lot of times when they make fried chicken in chinese restaurants, it becomes too dry but this one, they captured the moist texture of the chicken and captured the taste in the meat itself.  It was so scrumptious! 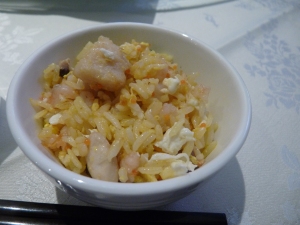 I’m sure you all know what fried rice is.  This one here seems so different.  Next up is the fried rice above.  It had eggs and some crispy fish, pieces of big shitake mushrooms and the extra special was the little bits of caviar.  It added this nice little extra taste to it.  This meal is starting to look like its all with food I love.  I actually really like fried rice and I tend to eat it whenever I travel and see how other restaurants make it different.  It was a huge hit with our whole crowd. 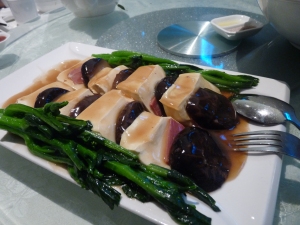 Last plate to come is the one including the Chinese ham which is a delicacy of Chinese cuisine.  When eating this, it should be as a whole with all three ingredients together of as shown here, mushroom, ham and tofu. I’m not a big fan of tofu.  The best part of this was the sauce.  It was very special.  It was pretty good.

Last up is the complimentary dessert, Red Bean Sweet Soup. Chinese desserts usually come in sweet soups a lot.  I’m not a big fan of red bean sweet soup.  This one tried to be different by adding little bits of coconut shreds.  Even with that, the aroma was very delicious, however, the dessert wasn’t too good. It was missing something that made me feel that it was complete.

This restaurant is definitely a place that I’d go back to. I feel like there is so much more fusion dishes that could be tried and tasted here.  If you are in the area, you should try it out.  Fusion cuisine is definitely the new concept which Montreal is trying to get into.  Skyview definitely has a lot that other restaurants could learn from.