In Part 1, I took you on a little hiking trail and it gives you a good idea of what Lamma Island looks like.  Its altogether a popular vacation area.  Aside from being that, it is also known as a fishing village so being an island, it has access to lots of fresh seafood.  I mentioned that in the last post and I didn’t forget but rather I wanted to have a post to show you the seafood: giant shrimps and lobsters and crabs.  Whether you are into seafood or not, its still quite eye-opening to see it all live in front of you.  Your trail in Lamma Island is pretty much starting and ending with seafood restaurants all over the place, nested right next to the harbour. My pictures will go from beginning to end of trail in order. 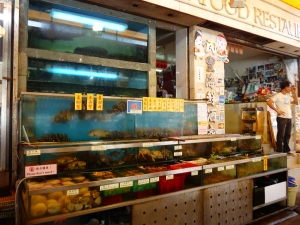 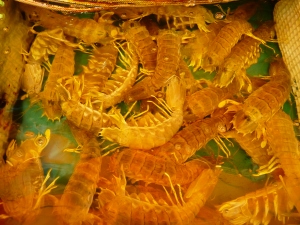 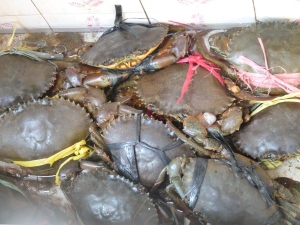 So tanks and tanks of seafood may be the focus of Lamma Island.  If you are there and have time, you definitely should arrange some sort of seafood meal.

Other than seafood, there were animals.  I mean (mostly) domesticated pets.  My mom told me that its normal for business owners in small regions like this to have pets because then it poses as protection and security so you see mostly dogs around.  Oddly enough, there was an animal shelter and thats where you see the cat below.  I`m guessing there is a serious amount of strays as well.  I sure hope that it will be kept under control. 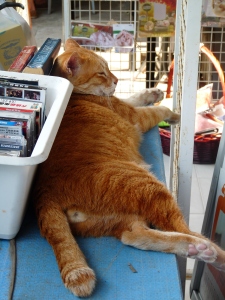 Look at that! I even gave you a little something.  We even saw cranes.  There were about 5 around this area.  It was absolutely cool!

Last time for the A Word A Week Challenge: Flower, I gave you mostly flowers from this trail.  So I just have a few more of the natural beauties I found to share.

I know one of them are flowers but the other one is super pretty too, right? I think that it was a very original picture so I had to share it with everyone.  The tree was made up of strands and strands of these draping downwards.  It was a pretty nice sight!

I actually have a little extra that I would like to mention before I end this post.  There was one feature of the hiking trail that I really loved and its this:

That is right everyone.  Its a dog toilet.  No more poop bags and carrying it through the whole path.  Just let your puppy take care of business here.  There are about 3-5 on the trail from my recollection.  I think its the best to make hiking on a family trail dog friendly because after all, our pets are part of our family.  Don’t you think its a great idea?

One more part to go! I am a bit behind schedule, please forgive me.  I will try to get it done before I head off to bed.  Any ideas on what its about? No worries you will see soon.