Yesterday I had another spontaneous baking day that changed originally planned chocolate chunk cookies to something I have been wanting to bake in ages.  Thats right! Old-fashioned gingerbread! I have no idea why I want to make gingerbread so much, maybe its because of I love gingerbread cookies so much.  So this sounds like something tasty to experiment or maybe its just to bring some (really) early Christmas baking into the house.  I don’t know the reason, I did it! I finally made gingerbread and it turned out pretty good! 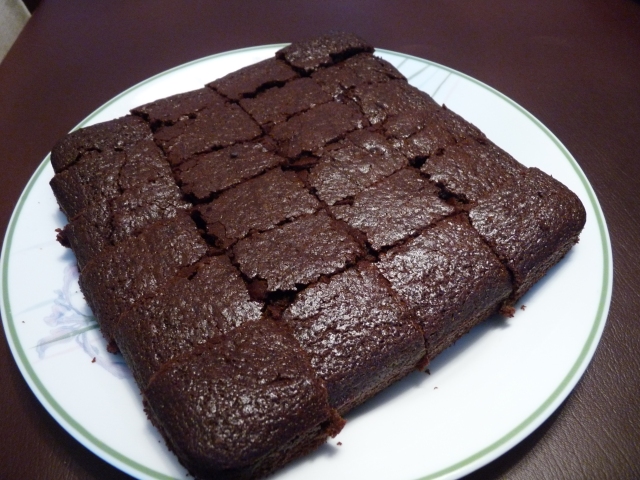 Yet another recipe from 500 Cookies, Biscuits & Bakes by Catherine Atkinson

How to make it:

1. Preheat the oven to 350F.  Line an 8in square cake pan with baking parchment and grease the parchment and the sides of the pan.

2. Add the vinegar to the milk in a small bowl and set aside.

3. In another mixing bowl, sift all the dry ingredients, except the caster sugar, together three times and set aside

4. In a bowl, beat together the butter and sugar until light and fluffy.  Beat in the egg until well combined.  Stir in the molasses, stirring well.

5. Fold in the dry ingredients in four batches, alternating with the milk.  Mix only enough to blend.

6.  Pour the mixture into the prepared pan and bake for 45-50 minutes, until firm to the touch.  Cut the gingerbread into squares and serve warm with whipped cream.  Decorate with preserved stem ginger.

This recipe turned out pretty well.  It wasn’t too sweet either.  I believe that it should have been more firm, but it could be because instead of milk and vinegar reacting together, I could only use water.  You can also decorate it like it says with whipped cream but since my mom isn’t a big fan of that, I decided to let that go as well.  Without any toppings, I can tell you that it still tastes pretty good, so its really a preference.

I will definitely consider making some of this for Christmas when December comes around.  Maybe its time to start trying out some new recipes for Christmas baking.

Do you think its too early? Its just baking, right?